An important exhibit open at the Watkins Museum of History, February 25 through August 19:

In 1882, a violent mob took George Robertson, Isaac King, and Pete Vinegar, arrested under accusations of murdering a white man, from the Douglas County jailhouse and hanged them. Thirteen-year-old Margaret “Sis” Vinegar, the survivor of an assault that prompted Robertson, King, and Pete Vinegar’s defense, was also arrested, and sent to Leavenworth penitentiary where she later died of illness. For years, the story of their deaths remained a quiet burden on the community, remembered among the Black citizens of Lawrence but largely forgotten in the telling of the city’s history.

The Community Remembrance Project, a group of community organizations – including Watkins Museum of History—working to install a marker near the site of the lynching held a soil collection ceremony in fall 2021. The event served as an opportunity for the public to mourn and created a tangible remembrance of the lynching’s victims through the collected soil.

Soil for each victim of the lynching, including Margaret Vinegar, is now part of the Watkins’ permanent collection. This February, the Watkins will partner with the Community Remembrance Project to create an exhibit on the 1882 lynching and remembrance efforts. 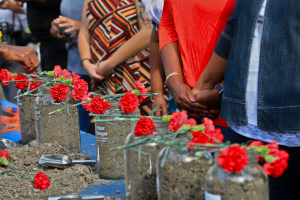 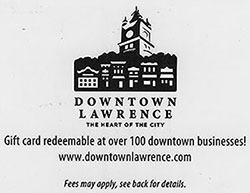